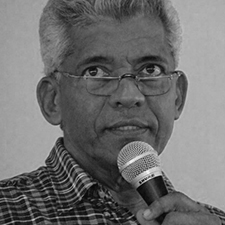 Gordon ‘Tyde’ Russell is the longest serving commandant in the history of Moorlands and has been involved in the 9-12 boys’ camp for over 50 years! He came to Moorlands as a camper and then went on to serve as a counselor, commandant, and summer camp committee member. In 1978, he became a Board Member and continues to serve in this capacity today. His contagious faith has inspired many.

Tyde was also involved in Pioneer camps which were sponsored by Inter School and Intervarsity Christian Fellowship of which he was a Board member. These camps were held at Robin’s Bay, Fairy Hill, and Top Mountain. He and his wife have been founding members of Deeper Life Ministries and Family Life Ministries. He is a member of Mona Heights Chapel and has been an elder there for many years. He and Grace have three adult children - Stephen, Andrew and Joseph and three grand-children.