-An August 1959 article in the “Caribbean Challenge magazine

On a hill in Mandeville, Jamaica, stands a large and imposing house. Its name, spelled out in white-washed stones, indicates that this is MOORLANDS, campers’ paradise, conference centre, and permanent memorial to a remarkable man. 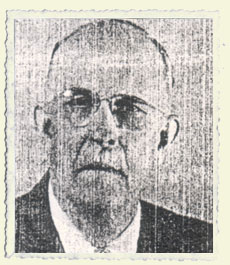 Moorlands will always be associated with the memory of Oscar Lord, its master until his tragic death last September. Moorlands was the scene of his ripest, most fruitful years .. years tinged with sorrow for him, but in which his home became a spiritual power-house. Time would fail to tell of the lives, young and old, drawn into vital touch with God through the ministry of camps and conferences at Moorlands.

This month the green acres of Moorlands will be busy with young people as the twenty-second summer camps’ season gets into high gear. From the camps, as always, some will go away saved, strengthened, dedicated to the Master’s service. The brisk, grey-haired figure of Oscar Lord will be missing, but his ministry is continuing.

The life of Oscar Lord, one of Jamaica’s most successful Christian businessmen and property-owners, might have had a very different outcome but for a crucial experience that came to him as a young engineering student in Toronto, Canada. Brought up in a strictly religious Jamaican home, the self-righteous Oscar was badly prepared to answer the little man who trotted after him as he was striding back to his lodgings one day, and who stopped him with the question – “Young man, if you died tonight, would you be saved?”

Oscar swung around angrily, ready to annihilate the impertinent questioner. Then he saw the little man, and began to laugh instead.

“My good man, I’m doing the best I can … living a good life. We have to wait till we get to the other side before we know that.” He strode on.

The little man would not be quenched. Almost running beside his quarry, he opened his New Testament at the second chapter of Ephesians, and breathlessly began to quote verses 8 and 9: “For by grace are you saved through faith, and that not of yourselves; it is the gift of God; not of works lest any man should boast.”

Oscar had heard enough. Curtly he shook off the fellow and hurried away. But he could not shake off the question.

That night he sat down by his bed and said to himself, “Oscar Lord, do you mean to say that you, an intelligent, confirmed man, do not know whether the Bible says that you can know you are saved?”

He decided to find the answer to the question. The following Sunday he found it … sitting at the back of a little chapel. The preacher’s name is forgotten, as is his message, but it held the answer for the seeking young man. He committed his life to the Lord that day, and took the gift of salvation by grace through faith. There was no doubt in his mind as he left the chapel … he was saved, and he knew it!

With characteristic zeal, Oscar determined that his four brothers and sister should share his new-found faith. When his father’s failing sight brought him home to Jamaica and property life, he hastened to tell the good news. To his dismay, the family laughed! But faithfulness won them, and Oscar had the joy of seeing them turn in surrender to the Lord.

It made a big impression on the family when Oscar, wanting to give something costly to the Lord who had done so much for him, gave up smoking. The surrender cost him many battles and repeated failures, until the day came when he realized that the battle was not his, but God’s. The sacrifice, so hard to make, could only be achieved by surrendering first to the Holy Spirit, and by trusting Him to do the work in him and for him. Then he Lord took away the desire.

There were other failures, other victories. He had a quick temper, and had to do battle with it all his life. His ability to make money was another temptation. In recent years, he confessed: “I could so easily get wrapped up in making money. I have had to definitely face it out with the Lord, and let Him take what I do have, and use it in His service.”

He learned how to use money for God’s work when he married Scharlie Clark, daughter of Judge Clark in Mandeville. She kept him waiting five years for her “Yes”, but their 12 years of happiness together was worth waiting for.

They planned to go as missionaries to South America with the Christian and Missionary Alliance. Accepted, their trunks were actually packed when the door closed in their faces. After shopping around for other openings, without success, they reluctantly concluded that their place was in Jamaica, and settled down to a life of stewardship … giving unstintingly of their substance, time and energy to the Lord’s work. As the Lord prospered them, so their capacity for giving increased.

Little was being done then, spiritually, for people of their own social level. So they started highly successful drawing-room meetings in Kingston, and young people’s weekend conferences at their home, Marlborough, Mandeville, which became a seed-bed for many of Jamaica’s present lay Christian leaders.

Scharlie, trained at Pittsburgh Bible Institute, with her sister Annis as helper, was in her element. Oscar supported, guided and financed the projects. They were happy in the Lord’s work, with each other, with their eleven-year old daughter Lucy, and at the joyous prospect of another little one being added to the family. Then the blow fell. Childbirth took the beloved Scharlie and her baby. The year was 1932.

Gradually, the shattered fragments of Oscar’s life knitted again. Lucy, growing more like her mother every year, became her father’s inseparable companion. Annis brought Scharlie’s vision for young peoples’ camps into reality, first under canvas at Marlborough, then at nearby Moorlands, when that house with built-in campsite, was procured in 1942.

The years rolled by. The camps grew in ever-widening circles of influence and blessing. Conferences for ministers, laymen and young people marked each passing season. Lucy slipped more and more into her mother’s place as hostess, finally taking over the organizing of the summer camps, when her aunt Annis had to lay down the burden.

One day, a 20-year old girl came to Jamaica, on her way from Ecuador to Wheaton College, USA. Peggy Clarke, daughter of radio station HCJB missionaries and relative of Scharlie Lord, was battling gamely through to a B.A. degree, despite a serious heart condition.

It was a surprise to all when Oscar and Peggy married in 1948. But despite the disparity in their ages, it proved to be a marriage blessed by the Lord. After only four years of married life, Peggy’s heart disease had confined her to bed almost permanently. It was her husband’s devoted, patient, self-less care that prolonged her life, enabling them to have those extra seven unutterably sweet years together.

They were years of usefulness for Peggy, in which she found strength to script radio programmes for shut-ins like herself, heard frequently over HCJB – years in which she drew many nearer to the Lord as they watched her patient sweetness under trial. And to her husband also, they were years of mellowing in the Christian graces, as he learned to suffer and endure at her bedside.

But the parting had to come … it was a miracle she stayed so long. It came one quiet April evening, last year, with no warning, no pain for her. Suddenly she was not … for God took her, leaving Oscar Lord alone for the second time.

Last summer Moorlands was open as usual to campers. Oscar Lord was there, benign and wise, gracious as always, but with an impenetrable sadness in his eyes.

“He was making a big effort to get over Peggy’s death,” his daughter Lucy (now Mrs. DeCarteret) told the Caribbean Challenge. “He had plans to go to Ecuador, to see the work of HCJB which was so dear to Peggy’s heart. He hoped to fly over Auca territory, and to see the beach-head where the five missionaries were martyred, and take pictures. We encouraged him to pick up the threads of life again. We felt he had many years of usefulness ahead of him.”

A few days before leaving for Ecuador, the unbelievable happened. The master of Moorlands fell from a stairway, head first onto a concrete floor, and died a few days later from cerebral hemorrhage.

Oscar Lord’s life is over, but his work goes on. For the man who once said bitterly, “All I’m fit for is making money …” did the best thing possible with his money – he invested it for eternity, in Moorlands, as in countless other Christian causes and missionary enterprises. His investments have paid off a thousand-fold in the shape of lives saved, settled and empowered to work for the Master. And while the house on the hill stands, his ministry will continue.